Second Street is SFMTA's Bicycle Route 11. Currently the bicycle infrastructure consists of "share the lane" signs and some fading "sharrows" painted as a trial several years ago. In 2010 the bicycle lanes on Second Street were approved as part of the San Francisco Bicycle Plan’s approval process which included certification of an EIR, Environmental Impact Report.  However a specific design for the approved solution, regular Class 2 bicycle lanes, was not adopted in part because of opposition from automobile owners in the district who were worried about the elimination of some left turns on Second Street.
This delay turns out to have been a blessing as the design proposed in 2010 had some serious flaws, most notably the failure to address the Bay Bridge on-ramp at Harrison. It did what bicycle infrastructure has so often done in San Francisco: when the going gets rough, disappear. Rather than offering a solution that would provide more clarity for drivers and cyclists, the proposed design simply ignored the intersection.
This is not how you build an system friendly to cyclists from eight to 80 years old.  Times have changed markedly since 2010, with growing recognition among SFMTA traffic engineers that bicycling should be treated as an important transportation mode and that bicycle infrastructure needs to be continuous to function properly. With this change has come much improved continuity in recently designed bicycle infrastructure and a willingness to sacrifice some car space, particularly on-street parking, to realize this goal. 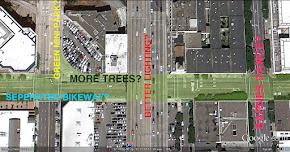